In 1925, renowned sociologist Marcel Mauss wrote “The Gift,” in which he proposed that the act of giving creates an obligation in the mind of the receiver. This theory of “gift exchange” has held sway for almost a century and is widely accepted as a real part of the human psyche. Applying this theory to stewardship, one might assume that any thank-you gift should increase a donor’s sense of obligation and the likelihood that he or she would contribute again. However, sociologists have found the opposite to be true:

Six experiments examined the effects of thank-you gifts on charitable giving. Results indicate that although people expect that the offer of thank-you gifts will increase donations, such offers actually reduce charitable donations. This effect was obtained across a wide variety of charities and gifts types, regardless of whether the donations were hypothetical or real, the gift was desirable or undesirable, the charity was familiar or unfamiliar, or the gift was more or less valuable.1

The explanation for this counter-intuitive finding is that external incentives for giving undermine intrinsic, altruistic motivation. In other words, simply by giving someone a material object in return for a gift that was purely motivated can dissipate the donor’s feeling of warm glow. You may have spent a great deal of time working with a donor to structure a gift that is deeply meaningful to them, and this study suggests that sending a material thank-you gift will undermine that hard work. This same effect has been found in economic studies, including a study from 1970 that famously suggested people are far less likely to donate blood if they receive monetary rewards for doing so.2

So what can be done if thank-you gifts actually have the opposite effect than we intended? Psychological studies show that experiential purchases cause higher levels of satisfaction than material purchases (e.g., most people get more satisfaction and joy from a fun vacation than from a new car). Numerous reports over the last twenty years have found that experiential purchases enhance social relations more readily and effectively, that they form a bigger part of a person’s identify, and that they are evaluated more on their own terms and evoke fewer social status comparisons with others than material purchases:

Psychologically, it is the experience that lives on and the possession that fades away. Experiences live on in the memories we cherish, the stories we tell, and the enhanced sense of self they help us construct.3

Applying this concept to stewardship, we can see that creating an experience that is deeply meaningful to the donor can be much more powerful than giving a standard thank-you gift. An experiential stewardship gift could be inviting the donor to a behind-the-scenes tour, or a talk by an expert or leader at your institution, or a dinner with those who benefitted from the contribution. You can get creative with the thank-you as long as you focus on it being a memorable experience and demonstrating to the donor the impact of his or her contribution.

If an in-person experience isn’t practical, or you are considering a wider reaching thank-you not tailored to a specific donor, you can consider sending a video message that creates a virtual experience.

Empirical sociological and psychological research leads to the conclusion that experiential stewardship creates higher engagement, stronger feelings of gratitude, and deeper feelings of social connection. In fact, it can make giving to your institution become part of a donor’s sense of self. A well thought out experience that serves as a donor thank-you, that increases their ties to other people, and that becomes part of their life story, is going to set your organization apart from organizations that send a pen, a tote bag, or even a gold plaque on a wall with their name on it.

What can you do to make thank-yous more meaningful to donors?

3 Major Stewardship Opportunities You May Be Missing 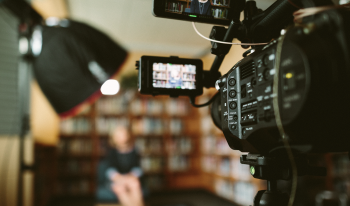 Video as an Engagement and Stewardship Strategy